The following are video links of motorcycling in and around DELPHI. Delphi was the center of the ancient Greek world, even called "the belly button". Videos were taken with a GoPro and the motorcycles I rode were a Suzuki 650 V-Strom and a BMW 650GS. The map shows the location of Delphi on mainland Greece and the ride to this place on Mount Parnassus is awesome with lots of new pavement. The Fortress of Eleutherai is situated on the highway to Delphi and well worth a stop. Plataea is the site of the last famous battle against the Persians and I decided to ride through a thunderstorm to get there on my way to Delphi.

Ride up to Arahova

Ride down from Delphi

Ride up to Delphi

Ride to Fortress of Eleutherai 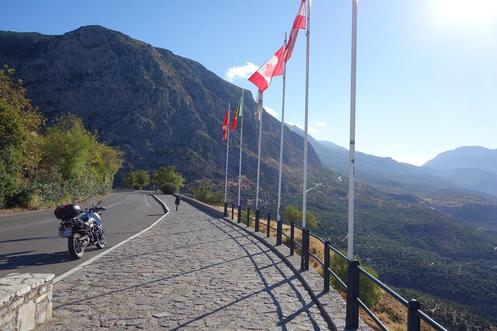